It’s Saturday evening. You’re exhausted from sending the kids to classes, doing the household chores, stocking up on groceries for the week, and whipping up dinner for the entire family. All you want to do for the rest of the evening is to unwind and have some “me time”…. But what about the kids?

Well, if like us, your kids have watched all the animations released in the past 5 years, here’s a list of our favourite (older) animated films that are not only entertaining, but teach some important life lessons as well! Read till the end to find out where you can watch these movies.

This animated film follows Lewis, young orphan boy genius, as he embarks on a time travel adventure in search of his birth mother. The film’s depiction of the future is exciting, creative and imaginative. From travel tubes to space crafts and singing frogs, it’s a mix of bizarre and entertaining all at the same time.

The motto - “Keep Moving Forward” is mentioned throughout the entire film, and I like that it’s used on many different layers. It can refer to never giving up when you’re faced with setbacks after setbacks, like when Lewis fails in his attempts to fix his broken inventions time and time again. Or it can refer to not letting past hurt and mistakes hold us back, for we have the choice to decide how the future would be if we keep moving forward. These lessons were woven into the plot through a clever twist at the end that will tug at your heart strings.

Watch Meet The Robinsons with your children and they’ll learn a lesson or two about grit, perseverance and optimism.

Lesson to learn: No matter how bad your past may be, it does not define your future. So keep moving forward!

“To See The World Through Another’s Eyes”

The film tells the touching story of Kennai, a young Inuit boy who has been transformed into a bear - an animal that he detests and perceives to be thieves. He embarks on a journey to “where the light touches the earth” to be transformed back into a human. Along the way, he meets a young cub named Koda, and his initial distrust evolves into friendship and then siblingship throughout the film. Koda eventually changes Kennai’s perception of bears from one of suspicion to acceptance and love.

What we can learn from Brother Bear is so important in today’s world - you can never truly understand someone unless you see the world through their eyes. It’s about acknowledging that your perspective is not reality, and having the humility remove yourself from your own to see from another point of view. In a world filled with conflict and differences, Brother Bear is the perfect film to teach acceptance and understanding to your kids.

Lesson to learn: Always view a situation from another person’s perspective before forming judgements and attitudes.

“Remember who you are”

Self-forgiveness, acceptance of death, and Hakuna Matata… these are just a few of the many lessons to pick up from The Lion King. But the one lesson that struck me the most was from this scene: https://www.youtube.com/watch?v=byDN8aoR4TI

Simba has ran away from his kingdom for many years after he believed he killed his father, King Mufasa. In his absence, his Uncle Scar, the film’s antagonist, has stepped in to fill his place as king. The entire animal kingdom is suffering from starvation during Scar's reign. In this scene, Simba faces the reflection of late King Mufasa in the water who says to him: “Remember who you are”. These four words, though seemingly simple, is so profound. In context of the story, Mufasa is telling Simba that he is the rightful heir to the throne, and hence should take responsibility and reclaim his place as king. But to us viewers, what should we make of this simple phrase?

Personally, it is a reminder for us to always live in a way that stays true to our real selves. It is to hold on to what constitutes our core - our values, morals, and belief system - and let it guide every choice and decision. Many a times, we choose to lead a life we aren’t proud of simply because the road is easier. Hence, the Lion King teaches us the importance of knowing what matters to us and having the courage to walk on the tougher path to fulfil our life’s purpose and calling.

Lesson to learn: Be sure of who you are, and live your life in a way that’s true to yourself!

Now get ready the tissue box, because this film WILL result in a lot of sobbing from the entire family, including your spouse! 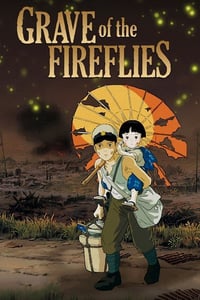 Grave of the fireflies is a 1988 Japanese anime film by Studio Ghibli, and is loosely based on an autobiographical novel of the same name. Set in World War 2 Japan, it tells of a strong bond between Seito, a teenage boy, and his younger sister Seisuko. Their home has been destroyed in an air raid, their mother has succumbed to her burns, and their dad is out at sea fighting the war. The entire movie depicts the siblings’ fight for survival - running from shelter to shelter in search of food and protection. What is most poignant about the film is how Seiko tries to shield his younger sister from the harsh reality of war, by carrying the burden of survival all upon himself and building a psychologically safe space for her to protect her innocence and childhood against the backdrop of brutality and violence. (SPOILER ALERT!) In the end, both their lives were lost to starvation.

The message of this anti-war movie is clear: war and violence will lead to no good. Watching this film as a family is a good way to introduce and discuss the devastating effects of war with your kids. While the themes are of course dark and heavy, the innocent and pure relationship between the siblings will be the glimmer of hope that will urge you to watch till the very end. It could possibly lead to a lesson on gratitude and contentment for the lives we are living right now, as opposed to the struggle and suffering depicted in the film.

Lesson to learn: War is never the option. Appreciate living in times of peace.

Yes, this segment will be about that famous 4 minute masterpiece at the beginning of the film. In those short 4 minutes, without the use of any dialogue, it paints the entire married life of Carl and Ellie with so much depth that by the end of the scene, you’ll have tears rolling down your face. (We hope there’s still some left after Grave of the Fireflies!). Carl and Ellie met as kids and they bonded over their love for outdoor adventures and their shared dream to visit the elusive Paradise Falls.

The movie skips past the falling in love process and fast-forwards to the day they got married, which is also where the four minute scene begins. After Ellie has passed away due to old age, Carl is filled with regret for not giving Ellie the adventurous life they both yearned for due to the mundane everyday things in life getting in the way. He then makes it his mission to uproot (literally) his house, which is a symbol of their love, to Paradise Falls in honour of his late wife, Ellie.

Together with Russell, a young boy scout who follows Carl against his will, he sets off on a journey to fulfil that dream. Midway through the film, he stumbles upon Ellie's childhood “adventure book” that her kid self had planned to fill up with all her future crazy adventures. Carl opens it and expects to find that it would be empty, only to realise that Ellie had filled it up with photos of their married life. On the last page, he finds a message she wrote before she passed on: “Thanks for the adventure. Now go and have a new one!”

It is at this point that the message of the film becomes clear - navigating life together is an adventure in itself. The little moments shared by the couple, like painting the walls and doing the household chores together, aren’t fillers between their grand adventures… they are in fact life’s greatest adventure itself. Despite never achieving her big dreams of visiting Paradise falls, Ellie has always been appreciative of and content with the simple but deep love they both shared, and that had always been enough for her. Knowing this, Carl puts his regret past him and starts a new adventure with his new found friends.

Many of us are always waiting for our next big adventure, such as our next vacation, that we forget to appreciate the small moments that happen every day of our lives. In an era where we are bombarded with messages to chase our big dreams, Up is a timely reminder for us to stop and cherish these little, mundane moments, like a simple family movie night, before we might never get the chance to again.

Lesson to learn: Don’t live life waiting for your next big adventure before life passes you by.

We hope this list would be a good way to not only kickstart your family movie nights, but it would lead to a discussion of values and morals you’d want to impart to your kids! You’ll be able to find Meet The Robinsons, Lion King and Up on Netflix, and Grave of The Fireflies on YouTube.