Much like our students, we at Smarter Me love the school holidays. Every holiday season, we’re...

Much like our students, we at Smarter Me love the school holidays. Every holiday season, we’re joined by eager young minds for our wide variety of future skills camps, ranging from our signature multi-disciplinary “Innovation” camps, to our “Money Matters” camps on financial literacy.

No matter which camp our students take, they are challenged to collaborate in teams, and persevere and hustle to make their business / idea work. Check out some of the highlights during our recently concluded November & December holiday camps.

Problem Statement: In our Change the World Camp, students were asked to think about problems they face in school. Bullying emerged as a hot problem (sadly). A group of innovative and conscientious girls came up with the problem statement "How might we prevent and reduce the incidences of bullying in school?"

The Solution: ABBy, a robot with a camera that would roam and monitor the school grounds, detects bullying through voice and visual, and immediately alerts school authorities to any incidents of bullying . They created a prototype using a LEGO robot with a mounted phone. A Medical Diagnosis App for the Elderly

Problem Statement: In our second Change the World camp, students learnt about the Megatrends, which includes Aging Population. They explored the various problems faced by the elderly, and healthcare was a big one. "How might we help give the elderly a peace of mind when it comes to diagnosis and medication?"

The Solution: This team found out that the elderly did not know how to use Dr Google and relied on their kids or headed straight to the doctor for every small sickness. So, they designed an app that would enable the elderly to enter their symptoms into an app and get a diagnosis of the likely ailment using a medical database and the subsequent action they should take. Their business plan was to operate on a freemium model where value added services are charged to the customer but the initial diagnosis would be free.

Love, Bonito for the Young Shopper

Problem Statement: During our Designer Camp, students were challenged to evaluate if there was a potential to extend the womenswear brand Love, Bonito's offerings and make it more appealing to teens.

The Solution: Our students found that teens lacked the awareness of the brand, but actually liked the designs from Love, Bonito. They designed an Instagram feed, creating avatars based off LB's actual designs, and called it “Young, Bonito”. Check out the video that they created (in 2 hours!).

Fun fact: They created the video and called herself "pixie", without knowing that LB actually calls their employees pixies!

Challenge: On Day 5, our Junior Innovators had to set up stall to sell their cookies/muffins. They had incurred costs to rent the booth, buy ingredients (cookies or muffins) and packaging (they could choose between boxes or plastic bags). Their goal: To make enough to cover cost and hopefully make a profit.

Highlight 1: This little boy, M, truly shone. Calm and focused without being aggressive, he smoothly went "Our muffins are better than the rest because we use Hershey's chocolate...Why don't you buy two boxes and I'll give you a discount?" 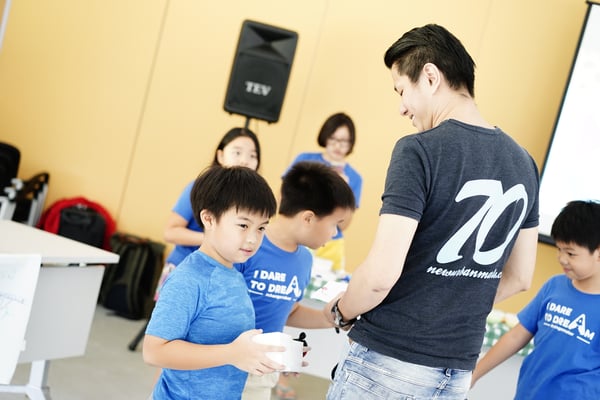 Highlight 2: Just keep running. That had to be these boys' motto. Not deterred by the heat, these boys were real hustlers who just kept going and didn't give up until they sold their last pack, approaching people after people to ask them to buy their muffins, and . After that, some of them even helped other teams sell their goods! 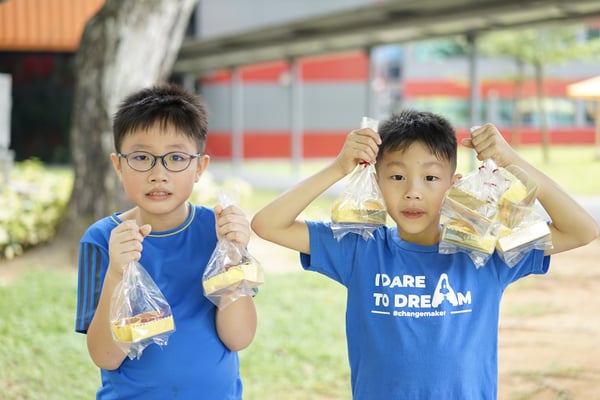 Challenge: For our second Money Matters Camp, our students faced a serious problem. Foot traffic at our camp site was low, as it was on the 3rd floor of a mall. This meant to cover their costs, they had to go down to the sidewalks.

Highlight: It was a scorching hot day, and while most teams would rotate their members between staying in the air-con classroom vs being on the streets, M (who by the way, was originally called brash and annoying by his camp-mates), stayed outdoors the whole time. What really impressed us was how he took rejections wholly in his stride, knew it was part and parcel of being an entrepreneur, and just kept trying until he closed a sale. #resilience

These are obviously just the tip of the iceberg. We’re excited about what students in our incoming March 2019 holiday camps will create. The mega trends and themes are going to be bigger than ever, but as ever, the most rewarding thing is watching young kids working together to create amazingly thoughtful things in such a short period of time.